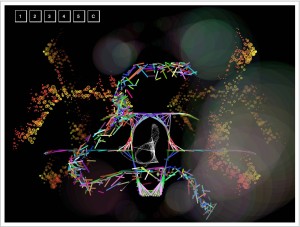 Changed background from (255) to (0) which is from white to black
Changed colorMode from HSB (Hue, Saturation, Brightness) to RGB (Red, Green, Blue)
Changed fill(random(50)+10,255,128,50) to fill(random(300)+20,80,13,100) just to see what would happen
Changed ellipse(mouseX, mouseY, 75*sin(counter), 75*sin(counter)) to ellipse(mouseX, mouseY, 45*sin(counter), 45*sin(counter)) again to see what would happen – I am going to guess that it changes the sizes of the bubbles?
After that first tweak the bubbles are smaller like I predicted and the colors of the bubbles are different as well – they take on these orange and greenish colors on the black background. Not very pretty.
Second tweak (bubble_sketch_2):
Changed the key that clears the screen from being the space bar to the c letter.
Changed ellipse(mouseX, mouseY, 75*sin(counter), 75*sin(counter)) to ellipse(mouseX, mouseY, 500*cos(counter), 500*cos(counter)) – again I assume this will change the circles, how I’m not sure yet. In addition to this I changed counter from 0 to 10.
Changed size(800, 600) to size(900, 900) – clearly this will change the size of the screen on which the little bubbles wander around on.
Changed the colorMode from HSB to the RGB mode again.
Looks terrible. There are HUGE green bubbles on a white background and a bigger white background than the original, I definitely prefer the first tweaking job I did instead of this one.
Posted the first tweak instead because it’s nicer looking.
http://www.openprocessing.org/sketch/109025 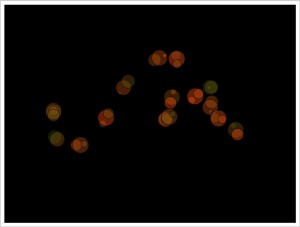 Another tweaking of someone else’s work (this one is one belonging to ArtBotHack) so that I can try to understand Processing. 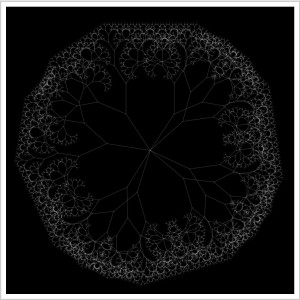