My name is Rick, its a actually not short for anything–it literally just says “Rick Rodriguez” on my birth certificate. I grew up in California, near L.A. and spent the majority of my life there. I am a sophmore in CD and I personally love textures. Textures of wood, concrete, plaster, and anything that is chaotic up close, but uniform all together. Thats why I took a particular fondness to this image from http://enohenze.de/puls/ that incorporates a backdrop for Merceded Benz and their new line with metal particles in a sea behind it 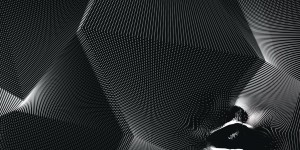 Just my own personal preference.

In any case, I am excited for this class because I enjoy the logical and mathematical side of things and I find it fascinating when vast information is understood and presented in a well designed manner.

My tweaked sketches are as follows
http://www.openprocessing.org/sketch/109288

All of them were from a great portfolio I found on openprocessing.org and by a username called Aris Bezas. After some searching, I found this persons code very understandable and well organized. The three original sketches are as follows, respectively

For the first one 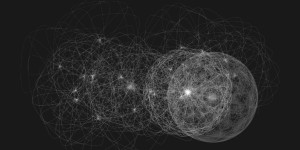 I found the background color and understood that (0) meant black and I changed it to a lighter tint of black (55). I tried to change the color of the white lines, but the format was one that I hadn’t seen before. Instead of a hex number or rgb code, I believe it contained i’s and j’s. So I didn’t want the white to get lost in any other colors so I left the background a subtle dark grey. I also slowed down the frame rate and found that the lines fill in at a slower rate that the original–makes sense. 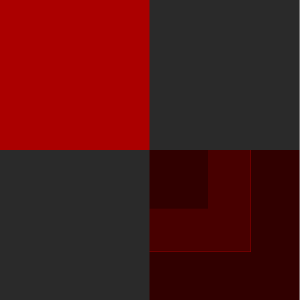 The second sketch (pictured above) began as a series of circles that came from the center and changed color at varied speeds and varied intervals. I really liked the movement so I started to change the speed. I changed the number for fill(myColor,800) from 50 to 800 and each time I increased the number by about 50, I realized that edges were getting sharper instead of blurry. Happy accident that I decided to keep. I then took the colors the original artist used and replaced them with my own tints of red all the way to black. I also changed the background color to a grey as well. I finally changed the command of ellipse to rect( to try a rectangle coming from the center. It didn’t work. However, the rectangle actually began to start coming from the top corner and bleeding into the bottom right corner that I was also pleasantly surprised with.

The last one I found particularly aesthetically pleasing. If you click and drag on the sketch, colored streaks appear and follow your mouse. I immediately added my own colors instead of the original and had to find out which command corresponded to which streak and adjust my pallette as such. I went with tints of blue that softly glow against the black. I tried to change the background to a different color and while I was successful, nothing really looked better than the black. So I tried a gradient. I saw that you can use pictures as backgrounds as long as they are the same size as the sketch, so I made a soft gradient in photoshop and tried to use that. I added the file to the code and link it appropriately and I was able to play the command and see my image in the background. #sucess

Then it went downhill from there. Once I saved and converted it to JavaScript, it was no longer able to recognize the image and displayed a grey background instead of black. After trying to change that, I resorted back to using a black color and uploaded it as such. Still has really wonderful streaks though.

Hey everyone! My name is Nelle (short for Ellen/ my backwards nickname) and I am a Junior in CD. I am originally from a beach town south of Boston and moved to New York over two years ago to go to Parsons. I am excited to start Creative Computing because I want to explore how processing can influence 3D design. I hope to expand my knowledge of Java and learn how to use processing to in different and unexpected ways.

I choose the image above because I thought it was an interesting example of how processing can be used to create visually intriguing architecture in a challenging space. I hope to be able to incorporate processing into the construction of designs through using the new 3D printers!

I found it under Examples in Processing.

I wish that I had been able to figure out how to change the colors as the particles drop.

2.) My second variation I found under the Color Examples in Processing.

The result was a smaller, more delicate interaction with barely colorful visible lines.

3.) My third variation I found under the Form Examples in Processing.

From playing with this example I figured out that Java’s color codes are different from the HTML color codes that I’m use to. I would like to learn how to change the shape more and create an continuously growing and expanding shape. From here I want to play around with sketches that other people have posted on openprocessing.org to gain more knowledge of different ways you can use processing.